Garden Super Size Me:
The Bounty & Benefits of Homegrown Food

Feature in The Iowa Source 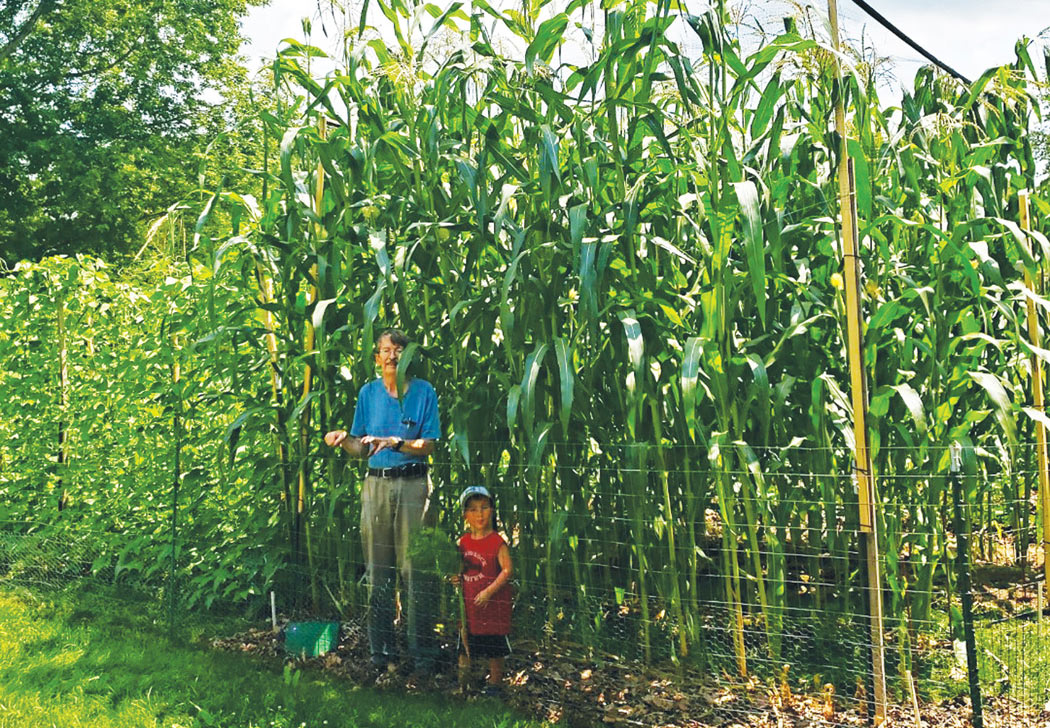 David Fisher and his young friend Máximo Lussich shelter in the corn’s shade during the height (14 feet!) of the garden’s bounty.

Since the age of ten, when I wasn’t busy being a student, a sailor, a German scholar, or a botany prof in Hawaii, I’ve managed to find time to garden. And I’ve continued to pursue that inner drive with a prodigious little plot of corn, butterbeans, tomatoes, and winter squash on the MIU campus in Fairfield.

Then a couple things happened.

First, COVID-19. That triggered me to think that everyone should start a garden, just in case the resulting upset to the food system should become serious. So I put my 40 years of experience in botany into writing a book about 21st-century “victory gardens” called Just Grow It Yourself. Believe it or not, many younger people are unaware of the 20 million gardens that produced 40 percent of our vegetables during the latter stages of World War II.

Then the second shoe dropped. To my astonishment, research revealed that I’d been telling a big lie during my years of teaching college environmental science and sustainability. Namely, that the industrial food system, despite a few nagging problems with pollution and soil erosion, was a marvel of efficiency, precision, and convenience. It kept every supermarket in the land stocked with thousands of items, with reliable, just-in-time delivery. What a stupendous accomplishment of modern technology and energy efficiency, rendering the backyard garden a cute but pitiful source of food.

Or so it seemed.

I discovered that despite the scores of gardening books and articles extolling the virtues of bountiful home-grown vegetables, apparently no one had ever thought to compare the efficiency, per pound of food produced, of home gardens to the industrial food system, measuring everything from taste and nutrition to cost, safety, energy consumption, and yield.

The shock is that home gardens are not just a little, but vastly more efficient than the industrial system, with far superior health, social, economic, and environmental outcomes.

Now, wait just a minute, some will surely say. Are you kidding? Everybody knows that one farmer with a tractor can do the work of a small army of gardeners with spades. And how could wielding a hoe in the garden possibly be more efficient than simply running out to the grocery store to pick up a few items, bingo, in 15 minutes?

The Efficiency Advantage of Home Gardens

To begin with, it takes three acres of land for the industrial food system to feed the average American for a year, compared to maybe 5 percent of that area—or even much less—to feed a person for a year on a balanced diet of garden vegetables. So how are those three acres efficient?

Admittedly, home gardens are not going to duplicate the meats, grains, dairy, sweeteners, and soy that make up 85 percent of the American diet, mostly in the form of ultra-processed, low-nutrition commodities. But those are precisely the foods largely responsible for 70 percent of the population being overweight—43 percent of whom are obese, causing nearly 50 percent of the country to be either diabetic or prediabetic. Not to mention a host of other food-related problems. How is that efficient?

The real kicker is that most of the industrial food system’s inefficiency comes from the gargantuan costs it generates but doesn’t pay for. Various “true cost” studies put these externalities in multiples of trillions of dollars per year:

One tiny example of external costs generated locally is the taxpayer-funded millions of dollars it has taken to build, maintain, and upgrade the nitrate-removal system—the largest in the world—in the Des Moines Waterworks plant. (That toxic nitrate comes from agricultural fertilizer, much of which runs into the rivers.) Not to mention the downstream damage to the fishing industry in the dead zone at the mouth of the Mississippi. Industrial food doesn’t pay those costs. Rather, it foists them off onto other segments of society in the form of huge government subsidies, higher health insurance, environmental damage, and many other ways.

In other words, the price you pay at the checkout counter is only a fraction of the real cost of your food. By contrast, home gardens generate no such external costs and very little in the way of up-front costs. When it comes to efficiency, we tend to miss the big picture because we see only small, misleading parts of it like the tractor in the field or the quick trip to the grocery store. But it’s there, it’s real, and it’s killing us.

Now let’s bring all this home. Remember Morgan Spurlock’s 2004 film Super Size Me, in which he ate only at McDonald’s for 30 days, documenting the disastrous results on his body? Well, last year I decided to do a corollary venture, eating only from my garden for a month and recording the weight of everything I consumed. Like Spurlock, I got a physical exam before and after the experiment. Unlike him, I emerged healthy, with even a 15-point drop in my cholesterol. Based on what I ate, and the area it took to grow it, I calculated that I could grow enough to sustain me for a year on this year’s garden of 35 by 40 feet. That’s about one percent of the three acres it takes to feed the average American for a year. 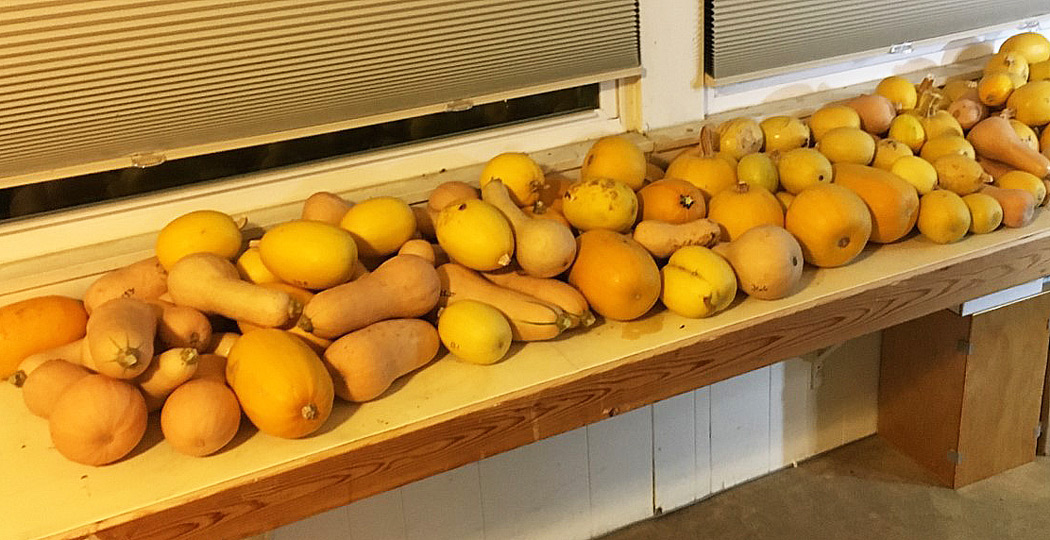 David harvested a boatload of squash this year.

As of late September, I’ve harvested eight-and-a-half months of food. Still to tally up are the sweet potatoes, as well as the rest of the okra, leafy greens, potatoes, and other items. Not bad, considering that half the garden was lawn last year, with sterile yellow landfill below barely four inches of turf topsoil. I also averaged maybe an hour of “work” (more like play for me, since I enjoy it so much) per day, using only hand tools. And I tried a number of varieties I’ve never grown before. Oh, and the garden gets only six and a half hours of direct sunlight a day, max. The point is, you can do a lot, even if some things are less than perfect.

What About Everyone Else? 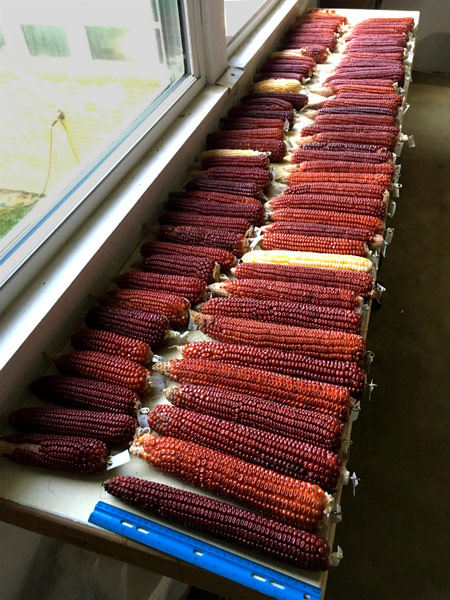 Heirloom red corn from the garden

Of course, not everyone is going to rush right out and start a vegetable garden. Yet a third of all U.S. households already have one, and two-thirds of adults say they have one or are thinking about starting one. Could that include you? Sales of seeds and gardening supplies went through the roof in 2020, as they did again this spring. Meanwhile, last summer you couldn’t find canning supplies anywhere in Fairfield. By contrast, this summer True Value Hardware in Fairfield had four pallets of canning jars. So it’s clear the gardening train is pulling out of the station.

Still, many people lack a sunny spot for a garden, or live in cities with little or no access to garden space. That’s why I suggest the adoption of a three-tiered food system anchored by home and community gardens, complemented by fresh and processed local foods. Those in turn would be backed up by sustainably reconfigured remnants of more distantly sourced foods. After all, I, like many people, don’t particularly want to give up bananas, cinnamon, croissants, pepper, lemons, cheese, and other such goodies, including some meat products.

Could we realistically get to where perhaps a third of the population grows most of its own food, providing a much-needed margin of safety against raging climate-change disasters and the now 20 percent of our country that’s food insecure? Before you answer, think again about those 20 million victory gardens churning out 40 percent of our vegetables in WWII. Add in the fact that home gardeners in Nigeria, with a fraction of our resources, produce 50 percent of their country’s vegetables on just 2 percent of its agricultural land. And remember all the people who already have a food garden.

Then ask yourself: Why not?

David Fisher’s Just Grow It Yourself—Home Gardens Outshine Industrial Food is available on Amazon and Barnes & Noble. For more information, see JustGrowItYourself.com and use the Contact page to comment or ask how you can help this food revolution initiative.