The Results Are In!

So, by early November I’d harvested enough of this year’s (2021) garden project to report on the outcome. That is, with Swiss chard and Russian kale still coming in quite handily. I’m sure I’ll be harvesting those cold-hardy greens until well into December.

Just to review the context, last year I ate only from my garden for 30 days, and from the amount I consumed, and the area it took to grow it, I calculated that I should be able to grow enough to feed myself for a year on a 2021 garden plot of 35 by 40 feet. The measure of consumption I used was three generous, satisfying portions per meal – breakfast, lunch, and supper, so nine portions per day—which works out to 3,285 portions for a year. The portion categories I used in 2020 were beans, corn, leafy greens, green beans, tomatoes, Irish potatoes, winter squash, and sweet potatoes. But I wanted to expand on that.

A boatload of butternut and spaghetti squash

Table 1 shows this year’s harvest, first in weight, since that’s what people most easily relate to, then by portions (a.k.a. servings). As you can see, by early November I’d racked up over 1,000 pounds of produce totaling 3,511 portions. However, that’s 1,055 calorie-dense portions (from corn, dry beans, potatoes, and sweet potatoes) to 2,456 calorie-sparse portions (everything else). Which is roughly a 1:2 ratio of calorie-dense to calorie sparse, exactly the opposite of what I’d intended.

This was partly because last year, I assumed that winter squash was a calorie-dense vegetable. Then I discovered that butternut and spaghetti squash have only 204 and 139 calories per pound, respectively, whereas kale has 227. Quite a surprise. Still, even if I left butternut and spaghetti squash in the calorie-dense category for this year, it wouldn’t change the ratio very much.

Now, could I actually live for a year on the produce from the 2021 garden? I’ve thought deeply about it, and decided that a positive answer should satisfy five different criteria: portions, diversity, calories, protein, and Vitamin B12. So here they are, one by one:

Diversity – Also a success. I knew that eight categories of vegetables from my 2020 30-day experiment, no matter how creative I got with different ways of preserving and preparing them, would get a bit boring before a year was up. So for 2021 I grew 21 kinds of veggies, which I arranged into 26 distinct categories. (Tomatoes came in fresh, sauce, jam, and pickles, there were two kinds of winter squash—butternut and spaghetti, and corn was in the form of both grits and cornmeal.)

Calories – This year, instead of simply categorizing vegetables according to whether they were calorie-rich or calorie-sparse, I looked up the number of calories per pound of the different vegetables, and totaled them up. To my surprise, I found that even with 107% of the desired portions per year, I was about 38% short of the daily calories I require for my BMR, or Basal Metabolic Rate, the most objective measure of physiological needs. No doubt this was due—despite my intentions to the contrary—to over-emphasizing calorie-sparse options in relation to the calorie-rich ones.

I discovered that among the vegetables I grew in 2021, dried beans and corn each have about 1,600 calories per pound, sweet potatoes have 535, and all the others gradually decrease from there, from dried peas (for split pea soup) at 369 to celery at 64. In other words, except for corn and dry beans, where you mark the boundary between calorie-rich and calorie-sparse is arbitrary. So I’ve stopped using those categories, as I think calories/portion is more meaningful.

Protein – Various sources now recommend 0.35g of protein a day per pound of body weight, which for me would be 47g. Yet my 30-day garden experiment provided just 33g/day, and I felt just fine throughout it despite the daily exertion of spading new turf as I prepared the soil for the 2021 garden. Since 0.35g/lb of body weight is a recommendation rather than a requirement, I suspect that it’s heavily influenced by the marked increase in U.S. overweight, obesity, and protein consumption over the last few decades, as well as intense pressure from the food industry to constantly increase meat, poultry, egg, and dairy consumption.

Perhaps, if your body gets attuned to having excessive amounts of protein for your BMR, it gets conditioned to genuinely “need” it. So, do I really need that additional 14g of protein per day? I doubt it. Especially since the USDA recommended as recently as 2009 that 5 ½ ounces of lean meat or 1¼ cups of cooked beans a day would satisfy the protein needs of a 2,000 calorie/day diet. That would be just 20g of protein. Have my protein requirements more than doubled in twelve years? Seems unlikely.

Vitamin B12 – This vitamin is a necessity, and it can’t be provided by any garden vegetable. So as I said in the book, it would make sense for the home gardener to keep a couple egg-laying hens, as eggs are the single best source of B12. Two eggs a day also provide 16g of protein, so that would help as well. Of course, you could always go with vitamin pills and/or the other sources vegetarians and vegans depend on, but that would kind of run counter to the idea of sustaining yourself from your own back yard. Not that we need to be totally ideological here.

Putting it all together – I ran a number of spreadsheet permutations and found that with the ten vegetables in Table 2, I could provide nine portions per day for a year while also meeting my daily BMR needs of calories and protein, all (except for the eggs) in my current sized-garden of 35’x40.’ With the exception of pinto beans, in- and between-row spacing would be the same as in this year’s garden. A North Dakota State University study  reported pinto bean yields—using 10” spacing between rows—of twice the yield rate I got this year from my first attempt at growing these beans. However, by simply planting a row down the middle of my current 42”-wide isles, which would provide 21” between-row spacing—more than twice that of the NDSU study—I could produce enough pintos to provide 8g of protein per day for a year.

Table 2. A potential 35’x40’ garden with enough portions, calories, protein, and Vitamin B12 to last a year

In terms of diversity, ten vegetables is better than last year’s eight, but this potential 2022 garden would be missing two of my favorites—winter squash and green beans—as well as sweet peppers, onions, celery, and celery root, which I also really like. For those I’d have to add two additional rows, which at my current spacing would result in a 40’x40’ garden. Nevertheless, my garden of 2021 has made its point: that I can grow more than enough portions for a year’s supply of diverse vegetables on 35’x40’. And Table 2 shows that based on 2021 production levels per row, I could, with a little re-prioritizing of which vegetables I grow and how much of each, also meet my calorie and protein needs in a garden of the same size while maintaining at least a modicum of diversity. All from a garden that occupies just 1% of the three acres required by the industrial food system to feed the average American. If I added two more rows to increase diversity, it would be 1.2%.

Of course, I’m not claiming that everyone could live solely on such a garden for a year, especially since I weigh only about 70% as much as the average U.S. adult male. Rather, these results serve as baseline data from which to build a convincing case for home gardens. If body weight is any indication, it could be argued that a home garden for a 200-pound man would require at least 32% more area. Yet even that would require only about 1.3% as much land as it takes to feed the average American. And remember that 70% of the population is overweight, with 43% obese, so any progress toward more vegetable consumption—and less ultra-processed food—just makes sense. The exercise, exposure to nature, and satisfaction of growing your own that would come with scaling up home gardening to produce perhaps a third of the U.S. food supply wouldn’t just greatly enhance healthy nutrition. It would also lead to far more efficient food production for the country as a whole, with a compelling range of economic, social, and environmental benefits to boot.

Doubtful that a 72-year old, using only hand tools an hour a day, can grow a thousand pounds of vegetables in a 35’x40’ garden with subpar soil and a max of 6½ hrs of direct sun per day? Really, you shouldn’t be, since I produced only 0.7 pounds per square foot. Compare that to a family who used Permaculture to churn out 7,000 pounds on a tenth of an acre. That’s 1.6 pounds per square foot, or more than twice what I got. Their website doesn’t say how that translates into portions, calories, or protein, but it does provide a rough indication that I’m not exactly the top home-garden producer out there. 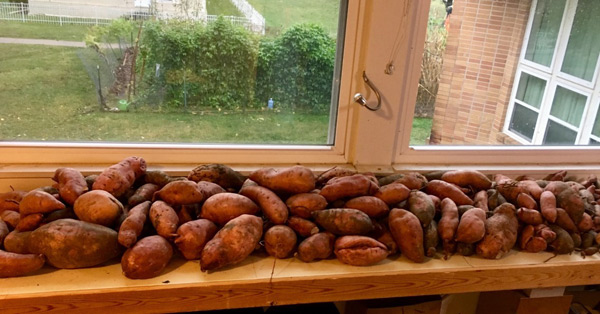 Sweet potatoes, with the garden in the background

So what’s next? Well, what I’d really like to see is other home gardeners starting to report on how long their own back yard gardens would sustain them according to their personalized requirements for diversity, calories, protein, and Vitamin B12. Tell me all about your results on the Contact Page.

For those who would like to know more about how I got all that produce out of just 1,400 square feet (which is 40% less than the floor space of the average U.S. single family house), and to hear about a few intriguing points of interest concerning the veggies themselves, look for my next blog. Coming soon.