Some people may have a hard time believing that I grew over a thousand pounds of produce on a garden plot of just 35’ x 40’. However, I kept meticulous records, and loaded everything into spreadsheets that churned out the numbers automatically—all based on my 30-day Garden Super Size Me experiment in 2020. An earlier post described my general practices as to how I managed it; this blog gets into strategies and information about the individual vegetables. They describe how I was able to maximize space in ways industrial agriculture either can’t or doesn’t because it’s not economical. Maybe that will help to make it a little more believable.

To wit, I planted:

Even with all that, my yields pale next to some others. I recently came across an article about Urban Homestead, a family operation that used Permaculture to raise 7,000 pounds of produce on a tenth of an acre. That’s 70,000 lb/acre, compared to my yield rate of 32,718 lb/acre, whch is less than half of theirs. I could tell from their pictures and story that the quality of their soil was much better than mine. In addition, their garden maximized direct sunlight (as opposed to my garden’s max of 6 ½ hrs of direct sun), and their plant spacing was much closer than mine. So I’m not at all surprised that they did so much better. The point is, my results are by no means wildly unusual.

Now, here are a few notes on the veggies themselves.

Kale – 48 pounds. As mentioned in my blog The Results Are In I kale outperforms Butternut and spaghetti squash when it comes to calories per unit weight. Who knew?

Swiss chard – 55 pounds. My newest discovery with chard is that the leaf stalks are delicious when cut into 3-inch segments, parboiled in salted water 5 min, then sprinkled with olive oil and Parmesan cheese and roasted in a 400 degree oven 20 minutes. Fabulous. There are also other recipes for Chard stalks, so don’t throw them away.

Celery – 8 pounds. My first time ever growing it. Came out with a very strong celery taste, but somewhat stringy with narrow stalks instead of lushly succulent, stout stalks like the best grocery store version.

Zucchini – 18 pounds from three plants. However, two of them were (Asian) Indian zucchinis, from seedlings given to me by my Indian neighbor, who had asked me to grow them. They have an earthy flavor and are much denser than ordinary zucchinis, so they really add up, weight-wise. 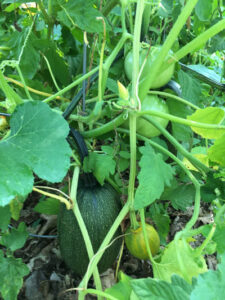 Tomatoes – 275 pounds. Like last year, divided into four different products: fresh, sauce (frozen in single-portion packages), jam (from green tomatoes this time), and pickled green tomatoes. They didn’t seem to mind being crowded in their cages by the Butternut and spaghetti vines crawling up to join them.

Potatoes – 57 pounds, a good bit better yield than last year, but still subpar. I think they just really don’t like the heavy clay soil; potatoes do best in a sandy, loamy soil. Still, the output of Red Norlands was almost normal (2 lb/ft). The all-purples tasted by far the best, but they were mostly smallish. I also grew some russets, which have about twice the protein content as most other varieties, and keep very well, but were also a bit on the small side.

Okra – 46 pounds. I grew a hybrid from Gurneys, which can be harvested at a little larger size than most varieties of okra. Wow, did they ever produce; at maximum production I had to harvest them twice a day, and they grew to 12’ tall. I blanched them in boiling water and froze them in small packets.

Peas – Just 1 pound, an experiment with a nine-foot row. Again, first time growing them. This variety was for drying for drying for split pea soup, not fresh peas. And they do make very good soup.

Green peppers – 20 pounds in four feet of a double row; I didn’t need that much, but they just kept on coming. Next year I’ll plant less, although I did dice, blanch, and freeze them for soups.

Green beans – 60 pounds altogether. I first planted Limkas, a long, broad, flat variety, but only about 15% or so came up. So I then planted Blue Lakes in the empty spaces. I did end up getting 11 pounds of Limka, but then the Blue Lakes started really coming on, and kept on until the first frost, 49 pounds worth.

Winter squash – 177 pounds. I planted half Butternut and half spaghetti squash. I would have gotten more spaghetti, but the squash bugs got into some of the vines so that many of the spaghetti squashes got only to about baseball size. Still, a fair number got to about 3-4 times that size. Butternut squash is impervious to squash vine borers, so they did fine.

Colored butterbeans – 12 pounds. Doesn’t sound like much, but that’s the dried weight. Just a quarter cup of dried beans makes half a cup of cooked beans. Oddly, the vines kept growing and flowering vigorously long after they had mostly stopped producing pods. These beans are really more adapted to the South, where their production lasts a good bit longer. Once when I was a kid (in western North Carolina) I measured a growth rate of eight inches a day on one vine. Jack-in-the-beanstalk material?

Pinto beans – 4 pounds, on 16 feet of row, so not as productive as the colored butterbeans. Pintos are what Mexican refried beans are made of, and they have more fiber than any other kind of bean. Unlike the butterbeans, which will climb up 20 feet or more given the chance, the vines average only about 3-4 feet high. They’re designated as “half-runners.”

Corn – 37 pounds, again the red heirloom variety known by the rather brutal name Bloody Butcher. Corn is such a special crop I’ll be writing a separate blog on it. Suffice it to say here that my harvest was one pound more on about half the area as the previous year I had grown it (2019). 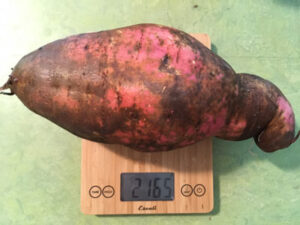 Sweet potatoes – 146 pounds of roots, 43 pounds of leaves. Unlike last year (2020), this time I harvested the leaves as well as the roots. Although a bit bland, they are just as packed with vitamins and minerals as other leafy greens. Their big drawback is they’re only about the size of your palm, or less, so not nearly as efficient to harvest as leaves of kale and chard, which in my garden reached well over a foot long and almost as wide.

After harvesting, sweet potatoes need to “cure” at 85 F a week or so to make them sweet. But for long-term storage it’s better to cure them a few at a time as you need them. Cure them all at once and they start sprouting.

Celery root – 3 pounds. Planted on a whim from a couple seedlings I spotted at a farmers market, celeriac, as it’s sometimes called, was one of the most pleasant surprises of this year’s garden. It lends a strong but not overwhelming celery flavor to stews and soups, and one softball-sized root goes a long way. It also stores well in the refrigerator.

That’s it for this year; we’ll see what happens in the next gardening adventure.