How do we assess the viability of food system fixes? First, let’s consider what constitutes an optimal “system fix.”

One of the most comprehensive and thoughtful descriptions of what a truly sustainable farm- based food system would look like was published this year by the Institute for Agriculture and Trade Policy. Founded during the farm crisis of the mid-80s, the IATP has a 35-year history of promoting solutions that benefit family farmers, rural communities, and the planet. It advocates thirteen principles of agroecology, which it considers to be the best approach to fixing the industrial food system. (Home gardens, by the way, fulfill all of them, including enhancing animal health if you include a couple properly cared for, egg-laying hens on the side.) To wit:

Wow, if you could do all that, you’d certainly have a much-improved food system. And basically, all the other progressive approaches call for pretty much the same kinds of initiatives. But the power centers of the industrial food system are having none of it. Or very little. They do want to foster what they consider to be sustainable food—and to be seen as sustainability good guys— but only while continuing to offer rock-bottom food prices, reap the lion’s share of the system’s profits, and basically, continue business as usual. Their latest attempt at that mission impossible is what they describe as a “sustainably intensified” food system. By which they mean increasing technical efficiency while ignoring human, social, and ecological aspects not amenable to their intensified hard tech. The technical and policy change approach to fixing the IFS is summarized in False Narratives of Food Production.

Yet advocates of agroecology and all the other progressive approaches hold out the hope that governments, international organizations, the private sector, civil society, and consumers will indeed somehow manage to induce the IFS to adopt their thirteen principles. And that they will rush them into place within the time frame so urgently demanded by the rapidly encroaching climate crisis. They hope for this even though agroecology, since its introduction in 1918, has achieved close to zero traction in the U.S. and only slight, subsidized progress in Europe. Here, I define genuine progress as producing at least a third of our food supply at non-subsidized prices broadly acceptable to the customer. And even that would be less than optimal for the longer term. So, can these thirteen principles magically “sustainabilize” the industrial food system anytime soon?

Flat. Out. Not. Possible.

What even agroecology doesn’t provide

Nor would agroecology itself be optimal if it were adopted. Perhaps surprising to progressive advocates of transforming the industrial food system, its thirteen principles, admirable as they are in theory, fall short of the advantages the Garden Food System offers. Which is to say, they do not provide:

1. A fully proven, viable alternative to the IFS

Because it expands an already existing, independent enterprise, rather than trying to repair an ossified existing system, the GFS has the huge advantage of being much more doable. Small scale or “proof of concept” successes with agroecology and similar sustainable systems here and there, usually temporary and well-subsidized rather than self-sufficient over time, do not constitute a proven, large-scale, viable alternative to the IFS. Producing half of a nation’s food supply with household gardens, with no government help whatsoever, and over centuries, as in Russia (population 145 million), does. Even in the U.S., large scale implementation, much larger and much more quickly ramped up than anything agroecology can point to, was demonstrated by the “victory gardens” during the latter stages of World War Two. As have similar wartime gardening efforts in other countries and other big wars.

2. Automatic inclusion of much-needed healthy, enjoyable, and satisfying exercise in the process of food procurement.

Health experts routinely bemoan the sedentary lifestyle of Americans. An ideal antidote? Well, if you start small and easy, and get educated on how to garden properly for your needs and tastes, gardening is a great, health-generating form of exercise. In fact, the exercise is a benefit rather than constituting a “cost” of “labor” as experienced in the IFS. If the activity becomes hard work, as media pundits often insist it must, you’re not going about it in the way that benefits you. For instance, don’t wear yourself out flailing away with a hoe to attack those weeds. Rather, as one alternative approach, use mulch to keep weeds down, retain water in the soil, and eventually turn into compost that becomes part of the soil.

By way of contrast, farms, regardless of how sustainable they are, require no customer exercise beyond picking items off the grocery shelf or farmers market table. That’s a big lost opportunity.

3. Automatic reconnection of (most) people to the earth and their sense of self.

By growing at least some of their food themselves, gardeners re-connect – to the earth, themselves, and others. And the more they garden, the more they reconnect—a result that has been well-documented by numerous studies. This is perhaps the greatest advantage the home garden system has over all farming systems in which a few produce food for many. Yet even progressive sustainable food advocates, just like their industrial cousins, mistakenly perceive home gardens as a grossly inefficient and thus negligible way of mass-producing food.

4. A means of achieving widely available, doorstep-guaranteed food resilience (for most people).

In the face of climate change-generated megafires, droughts, floods, hurricanes, nor’easters, and the like, almost everyone now recognizes the desirability of resilience. When the covid pandemic hit and vast amounts of milk were poured out, livestock euthanized, and vegetable crops plowed under—generating long lines of cars at food pantries—the industrial system boasted that it was resilient and could effectively adjust to the disruptions. 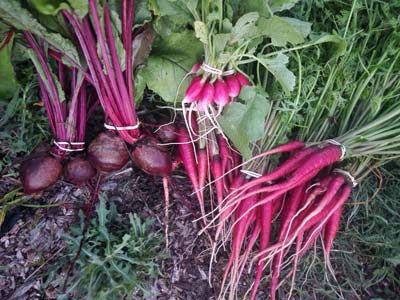 But did it? Well, somewhat, but often in brutal ways, as the most vulnerable food chain workers, from field harvesters to meatpackers to retail personnel, were forced to work without adequate covid protection, prompting thousands of worker deaths. Today, amidst covid aftermath and global food chain challenges, U.S. food prices are up 10- 20%, Moreover, 18% of the population, or 60 million people, are food insecure, compared to “only” 12% before the pandemic, despite scores of extra $billions in government help. So with all these outcomes still in place, just how resilient is the industrial system?

Agroecology and local food sources like farmers markets, CSAs, and urban farms are definitely more resilient than the industrial system by dint of reduced distance between field and fork. Community food webs are probably more resilient still. But together, these alternative systems provide only about 1% of the nation’s food, and lack the ability to ramp up to mass production, quickly or even gradually. Why? Because they’re forced to compete with the IFS without having its ability to externalize two thirds their real costs. As a result, they’re not able to match artificially cheap prices at the supermarket, which thus continue to draw the other 99% of food sales. And because of that, agroecology and other sustainable systems cannot achieve enough volume to deliver resilience to the country as a whole, regardless of how resilient they are theoretically.

Enter home gardens, in which you can produce a year’s supply of food at your doorstep in a plot that occupies less area (on average) than the floor space of your house. If even only 50% of the people who could do that did so, it would provide a huge buffer against massive loss of food resulting from, say, California’s Central Valley completely drying up, which is well on the way to happening. Fifty percent is too much to expect, you say? Well, 41% of all U.S. households already have a food garden of some kind. So what we need to do is ramp up the social and physical gardening infrastructure that’s already in place, which is a much simpler proposition than wholesale transformation of the industrial system. In fact, you could consider home gardens, especially when supplying a full year’s worth of sustenance, to be “ultra-local” food, thereby conferring “ultra-resilience.”

Most importantly, home gardens can scale up massively and quickly, as demonstrated by huge wartime garden initiatives in the U.S. and elsewhere. By contrast, agroecology and other farm based sustainable and regenerative systems, for all their otherwise commendable features, have to my knowledge never demonstrated that ability.

Caveat: where I’ve invoked “most people,” in this discussion, I’m referring those who do not live in areas of high population density (>10,000/sq mile, about 30 million Americans), or do not have access to community gardens or even a patio planter. That still leaves about 90% of our population who do have access to adequate garden space in unused lawns.  The remaining 10% would have no choice but to source their food from farms of one kind or another, or food banks and pantries, or government assistance like food stamps.

As for those who say they have the sunny lawn space but not the time to garden, I say the average American spends four hours a day watching TV. Whereas I spend less than an hour a day enjoyably raising enough food to feed myself for a year. Reaping, I would wager, far more benefit than you get from staring at the flat screen. As would the country as a whole.

Just trying to keep a step ahead of the doubters and nay-sayers . . . Which by the way I do appreciate, as they keep me on my toes. 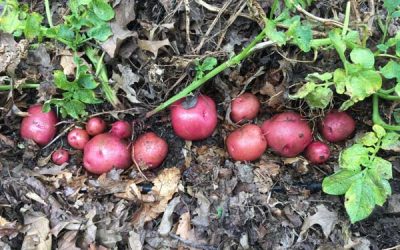