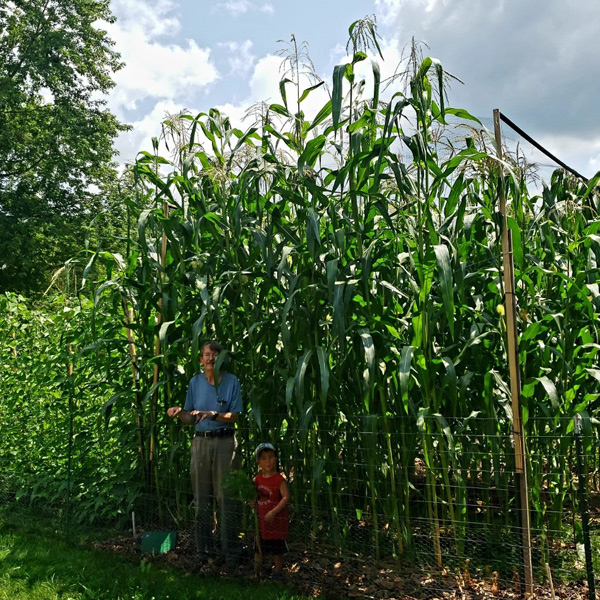 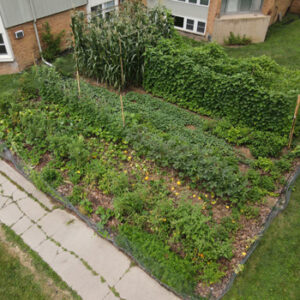 So how’s it going with my mission to raise enough vegetables on my 35 ’x 40’ garden to feed and keep me healthy for a year? I’d say, pretty good, but I’ll be surprised if I get 100% there this year. This will be an accounting of what’s happened so far.

First, remember that I measure garden output by the number of portions that constitute a full, satisfying meal for me. That is, three portions per meal, and three meals per day, with a ratio of calorie-dense to calorie-sparse portions of 2:1. Calorie-dense veggies are corn, beans, Irish potatoes, sweet potatoes, and winter squash. Everything else is else is calorie-sparse, e.g., leafy greens, zucchini, tomatoes, etc. Both categories of vegetables are nutritious, but you need a source of energy (calories) as well as vitamins, minerals, and other phytonutrients. You can’t live on watery vegetables alone. At least not for long. 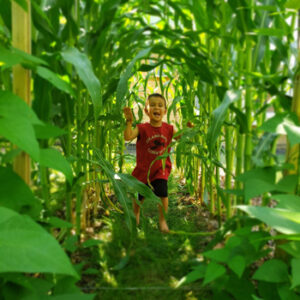 Máximo Lussich in the corn forest.

Ever since the last garden blog I’ve kept a record of the weight of everything I harvest, down to the tenth of an ounce (see below). I then converted the weights into portions based on what amounts to a satisfying weight per portion for me. For potatoes, it’s 13 ounces per portion, or a little over ¾ of a pound. For tomatoes, it’s 4.5 ounces; leafy greens, 5 ounces; and so on. All recorded into Excel spreadsheets, so it’s easy to keep track of. The amount of row length devoted to each vegetable is shown in the last column, which in some cases explains why the total number of portions is so low for that particular item. In other cases, it’s because of incomplete harvest. All of the leafy greens were interplanted, for instance between tomato or winter squash plant, so they have no figure for row length, as the tomatoes and squash eventually grew over them. That is, until the squash died down; then the greens took off again.

Totals as of September 5 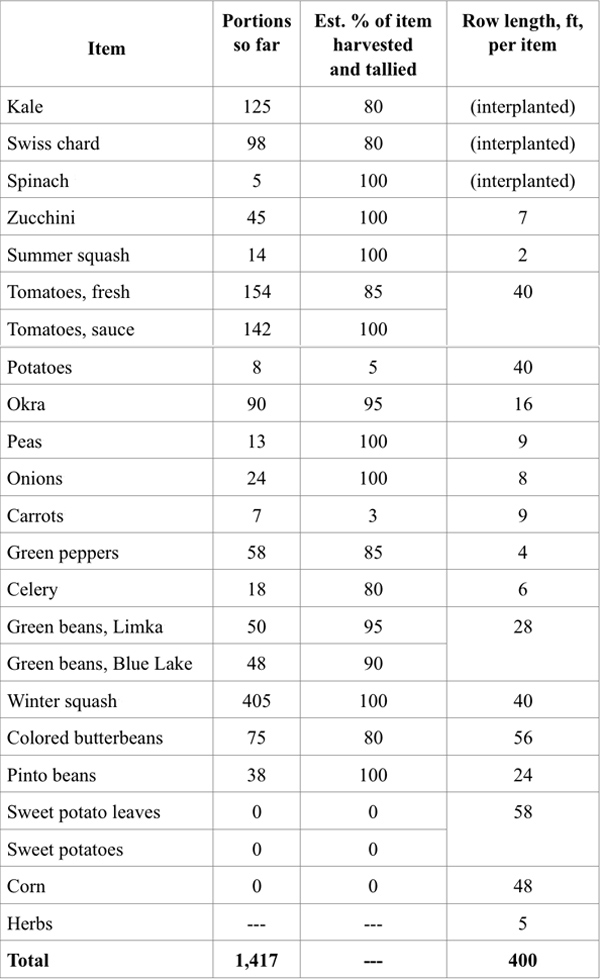 Now, how does it all pan out? Well, three portions per meal, and thus nine a day, would total 3,285 portions for a year. So at 1,417 portions harvested so far, I’m at 1,417/3,285, or about 43% of the way to a full year’s supply of food. That’s 157 days, or a week over five months. However, still to come are the sweet potatoes, their leaves, corn, and the rest of the beans and Irish potatoes, which together will boost the total quite significantly. The other items that are still at less than 100% harvested will also add to the total, but not as much as the heavy producers.

Wait, sweet potato leaves? Really? Yes, surprisingly, they’re a type of leafy greens, quite nutritious, tender, and good to eat, prepared like any other greens. I didn’t know that last year. 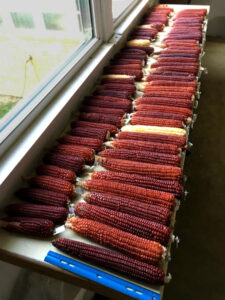 You’ll notice that the ears of red corn (“Bloody Butcher” – an heirloom variety) have little tags attached to them. That’s because I’m doing a bit of crop breeding research, for which I need to know the shelled, dry weight; percent pollination; row number; and position within the row of each ear. Also how many stalks produced two full ears instead of the usual one. I’ll provide the full results in a later blog. Already, though, I’m encouraged. In a hundred or so plants both last year and this, the number of ears about 10-12 inches long has increased from four to several times that. (See the blue ruler.)

Okay, will I get to a full year’s supply of food? At this point I’d say not likely, but I’d have to rate the overall results as not bad, considering that half the garden was lawn last year, with sterile yellow landfill below four inches of turf topsoil. I also put in an average of at most about an hour of “work” (more like play) per day into it, using only hand tools. And I experimented with a number of vegetables or varieties I haven’t grown before (asterisked in the table). Oh, and the garden gets only 6 ½ hours of direct sunlight per day, max.

I view all these constraints not as excuses but as indications of how amazingly much you can do even if not everything is perfect.

So really, not bad at all. We’ll see what the year’s worth of totals are in a couple months, when the other crops have been harvested and tallied up and the fall kale and chard will have stopped growing. Meanwhile, I’m already thinking about how I’ll do things differently next year. It’s always exciting.

← Prev: A Call to Science-Based Policymaking Next: The Results Are In! →