Feature in The Iowa Source 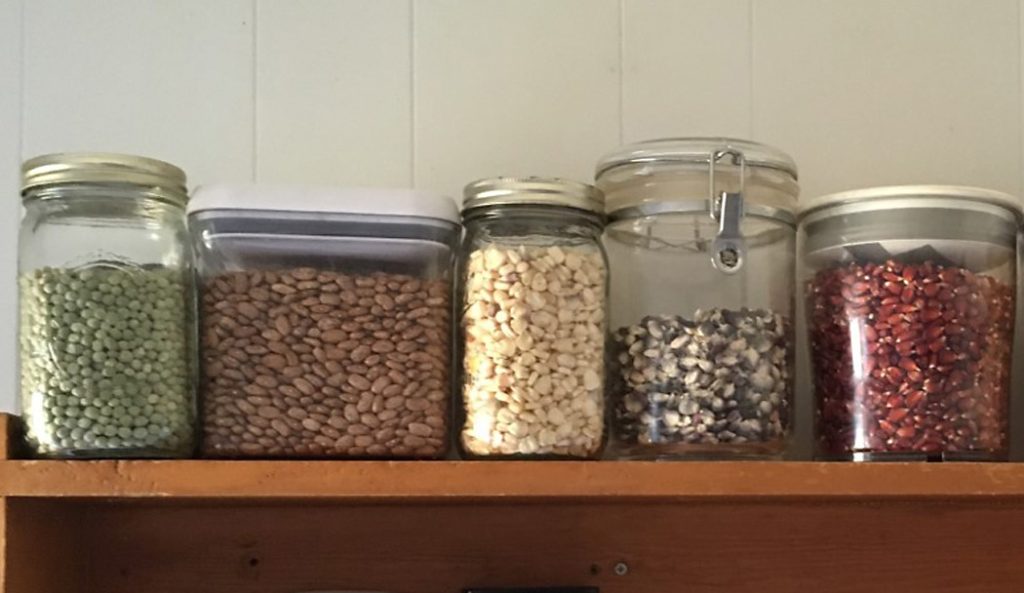 Bounty from the garden: peas, beans, and corn (photo by David Fisher)

Do you recall the photo of 14-foot-high corn stalks towering over me and my little friend Maximo on the October 2021 cover of The Iowa Source? In “Garden Super Size Me,” I described how I had planted a garden that would produce enough food to last me for a year. But at the time the October issue went to press, I had harvested only enough to last me about 8 ½ months. 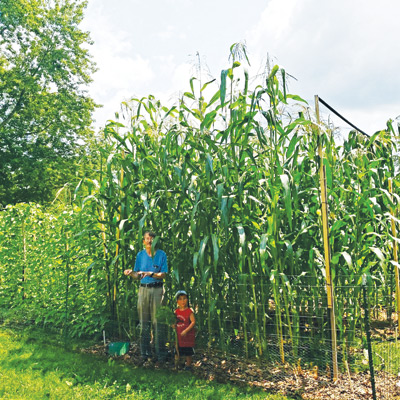 It wasn’t until early November that I’d hauled in the last of the Irish potatoes, green beans, sweet potatoes, and okra. The full harvest, illustrated in Table 1 below, shows that the 35-by-40-foot garden produced over 1,000 pounds of vegetables, totaling 3,511 portions. At three portions per meal, three times a day, that’s 107 percent of the 3,285 needed to last me a year.

However, I discovered that even though I planned for the calorie-dense vegetables to outweigh those that were calorie sparse, I came up with only about 60 percent of the calories per year that I needed for my Basal Metabolic Rate, which is based on a person’s height, weight, gender, age, and activity level.

The main reason was that I had assumed that corn, beans, sweet potatoes, Irish potatoes, and winter squash were all calorie dense. However, I found that only dried corn and beans are truly calorie dense (about 1,600 calories per pound), with sweet potatoes coming in with about a third as much. I also found that the protein content in the dried beans, corn, and potatoes I grew was less than optimal. (Per ounce of dry weight, potatoes have as much protein as human mother’s milk.) However, requirements for protein are not as well-defined as calorie needs.

So would a 35-by-40-foot garden sustain me for a year? Yes, but only if I planted more corn, beans, and sweet potatoes, and fewer vegetables like green beans and winter squash. It would also require two eggs a day (ideally from backyard hens) to supplement the protein and provide vitamin B12, which no vegetable can offer. One version of such a garden is shown in Table 2. It’s based on the same yield per row-foot of vegetables I harvested in my 2021 garden, so it’s reasonably realistic.

That said, it would be less diverse than I’d like, and it wouldn’t sustain a person significantly larger than me. Nevertheless, these yields establish a garden this size as baseline data, a starting point.

And what a powerful point it is! It means that I can sustain myself on 1 percent (1,400 sq. ft., or 0.03 acre) of the three acres it takes the industrial food system to feed the average American. Yes, 85 percent of the American diet is largely unhealthy, processed foods that a garden wouldn’t supply. That’s why I proposed a three-tiered system consisting of home gardens, local foods, and sustainably reconfigured distant food sources.

As a closer, consider this: The New Yorker recently reported a potential 20 percent yield-increase in plants genetically engineered to increase their rate of photosynthesis—all to help save the hungry with more food. Never mind that the world already produces 50 percent more food than it consumes, and that globally, obese people now outnumber the hungry. Compare that to healthy food from three acres’ worth of gardens like mine that could feed 100 times as many people as it takes industrial food’s three acres to feed one American a largely unhealthy diet. 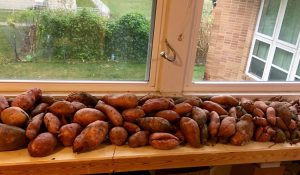 Harvested sweet potatoes, with garden visible through the window (photo by David Fisher)