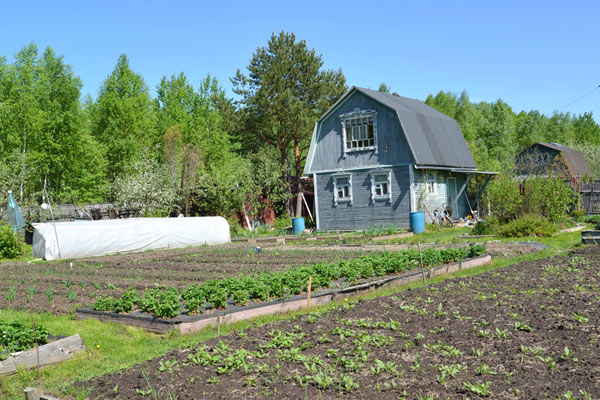 What a bracing discovery for home gardens!

I just found that in 2008 Leonid Sharashkin, a Russian grad student at the University of Missouri, did his PhD research on “The Socioeconomic and Cultural Significance of Food Gardening in the Vladimir Region of Russia.” In addition to laying out a fascinating history of home-style peasant agriculture in the country as a whole, he also described his in-depth study of household gardens in the region he grew up in, the Vladimir “oblast.” This work is extremely well-written and is truly seminal in depth and breadth, providing the best evidence I’ve seen of durable, efficient mass provision of food by way of household gardens. It’s better example thereof even than victory gardens. And healthy food is not even the most important outcome.

Herewith are some of the more pertinent points that bear mentioning.

Categories of household gardening in Russia

First, by food gardens Sharashkin meant not only the famous Dacha gardens of city dwellers (to which, in order to tend them, said dwellers have to travel, often for some distance), but also subsidiary plots, allotments, and other household gardens. All are relatively small—from the typical 600 square meters (0.15 acre) of the Dacha to 0.5 ha (1.2 acres) of subsidiary plots next to villagers’ houses. Using them mostly for subsistence, family members tend them rather than hiring laborers. These features set food gardening distinctly apart from modern, large-scale industrial agriculture.

Unlike our USDA, Russia’s Federal State Statistics Service keeps records of the food output, land usage, and financial value produced by household gardens. It reported that in 2008 they produced 51% of Russia’s food output on 3% of its agricultural land. By Sharashkin’s reckoning, it thus takes 38 times less land to produce 1 ruble’s worth of output than the country’s “official” industrial agriculture. In terms of produce weight per unit area of land, the yield of Russian conventional agriculture is just 2% of that of household gardens, which approaches my finding that home gardens need only 1% of the land the U.S. industrial system needs to feed one person. Thus, says Sharashkin,

Russia’s household agriculture — possibly the most extensive in any industrially developed nation — suggests that in developed countries highly decentralized, small-scale food production is possible on a national scale.

Nor is this just a recent phenomenon, as Sharashkin goes on to describe centuries of deeply ingrained connection that Russian peasants have had to family food production. From the times of pre-tsarist to tsarist to Soviet collectives to the present, family gardens have virtually always made the largest contribution to Russia’s food economy. For this reason, he describes them as “primary” agriculture, not just a collection of hobby kitchen gardens. In the Vladimir oblast from 2001 to 2005, households were producing even more—52% to 62%—of its agricultural output, depending on the year.

What’s planted in those gardens?

Russians love their potatoes, producing more of them than we do, even though our population is more than twice as large as theirs. The great majority of those spuds are produced in home gardens, along with vegetables and—in contrast to typical American home gardens—perennial crops, forages, grains, and dry beans. Our home gardens don’t usually include those kinds of crops, but Russian gardeners show that it’s not only possible but feasible. I have no doubt that such broad provisioning of foodstuffs will serve their country well in the wake of the severe economic sanctions that have just been placed on it. Especially since, although Russia is a major exporter of wheat, it will now need a larger proportion of that staple for its own people as they weather serious hits to agricultural imports. 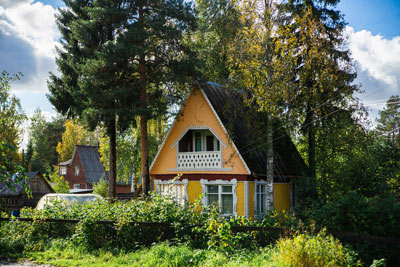 For me, “spiritual” doesn’t necessarily mean religious, but rather, connected at a deep level—with the earth and the cosmos, with other humans, and especially with oneself. Not coincidentally, home food gardening enhances those connections, which together is even more fundamentally significant than providing food. Sharashkin emphasizes this concept by quoting E.F. Schumacher (of Small is Beautiful fame), who declared that contrary to the industrial approach, agriculture isn’t just about producing food as a commodity:

A wider view sees agriculture as having to fullfil at least three tasks: — to keep man in touch with living nature, of which he is and remains a highly vulnerable part; — to humanize and ennoble man’s wider habitat; and — to bring forth the foodstuffs and other materials which are needed for a becoming life.

It’s very difficult to accomplish the more spiritual of those tasks with the industrial food system, simply because, except to some degree for the farmer, humans are cut off from ever touching agricultural soil. Let alone planting a seed in it and nurturing the resulting plant all the way to harvest, then prepping and eating it. Many American children today cannot even identify common whole vegetables, so separated are they from the magical process of bringing plant life to full fruition. Without the deep connectivity this process provides, the fabric of society starts to fray and fall apart, as ours certainly has.

What keeps people from experiencing the connectivity benefits of gardening? Usually, it’s fear of the perceived time and labor it would involve. People often tell me, Okay, gardens are fine, but did you subtract the cost of the labor/time you put into it? Yet seeing it as a cost is framing it solely as an industrially oriented effort. They don’t understand that when gardening is done for the right reasons and in the right way, the physical activity is not a business cost (though it certainly is in industrial ag), but a spiritual and physical benefit.

In fact, if gardening is not done so that it’s a self-enriching experience, it’s not worth doing at all. And to be truly worthwhile, it must be enjoyable, inspiring, and charming. To accomplish that, it first has to be handled without undue strain or frustration. Second, the learning process has to itself be enjoyable, ideally by personal instruction. Yet even if you’re learning from a book, article, or online, it still should be fun. Whatever, as long as it’s accessible, rewarding, and empowering.

Of course, some gardening disappointments are inevitable. But don’t waste time indulging in, as Elliott Coleman puts it, “garden guilt.” Just learn from whatever didn’t go as you wanted or expected and move on with enjoyment. Says Sharashkin:

As observed by a number of researchers (e.g., Lovell 2003), many Russian gardeners grow food largely for the feeling of satisfaction from the activity itself, and from bringing in one’s own harvest. This is what one of the founders of ecological economics, Herman Daly (1977), termed psychic income, i.e., personal enjoyment derived from an activity. This “enjoyment,” while being a very real experience on the part of millions of gardeners, is at the same time difficult to measure or define with exactness.

So, “psychic income,” a.k.a. enjoyment, is a must to get the full benefit of gardening. Sharashkin also reported that the yields of Dachniks who gardened purely for enjoyment were just as high as they were for those doing it mainly or only for the food itself. So, gardening done right is not only pleasurable, it’s powerful. 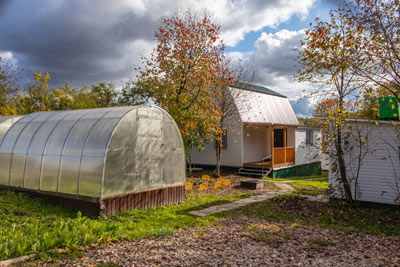 Surprisingly, Sharashkin found that the highest-income group of households satisfy a greater share of their food requirements through self-provisioning than the lowest-income group.

This is probably the opposite of what you’d expect. Wouldn’t low-income people need home-grown food much more than those who can go to a grocery store or restaurant whenever they want? Evidently not, and not only in Russia. Surveys by the National Gardening Association here in the U.S. show that in 2020 the percentage of households earning $200,000 or more a year were more likely to participate in vegetable gardening than those whose household income was less than $30,000.

You could argue that lower income people would be less likely to have the needed land, or that maybe they can’t afford the up-front costs. However, the NGA study also shows that even middle-income households do food gardening less often than the more wealthy. Besides, with an overall average of less than $100 a year in gardening expenses ($8/mo), lack of resources seems unlikely to be a significant impediment to having a garden.

Since 2001 household gardens have been producing over 50% of Russia’s agricultural output, yet they are hardly ever reported in their mass media, nor are they reflected in government policies. This bias also shows up in large-scale subsidies to the industrial sector, whereas no help whatsoever goes to household gardens. As a result, says Sharashkin,

. . . agricultural policy cannot even envision an agricultural development scheme that would not be based on support to large-scale industrial producers and the increased commercialization of whatever ‘surplus’ household gardens may produce.”

Same as in the U.S. The USDA most decidedly could not imagine that home gardens, per pound of food consumed, are far more efficient than the industrial food system. In fact, it would not occur even to small local farmers that home gardeners can produce food more efficiently than they (the local producers) can. Both large-scale conventional and local farmers assume that only farms can mass produce food effectively. They are, of course, mistaken.

So altogether, the “Dachniks” have shown us the way, but we have a lot of incentivizing work ahead of us if we want to inspire the country to engage the full benefits of home gardening.

← Prev: No Trade-Offs Next: Lawns! A Vast, Untapped Source of Food Wealth →